When did Facebook become a serious player in a political game? 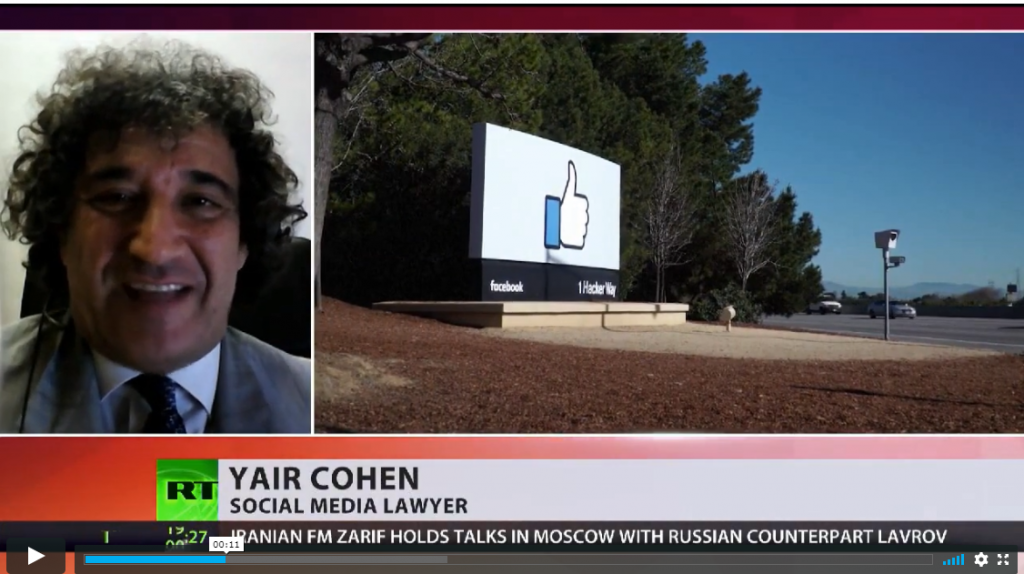 Solicitor Yair Cohen says in a TV interview with RT News that during 2019, Facebook has cemented its position as a political player. Also in 2019, Facebook officially ceased to be a mere social media platform as it has engaged on a regular basis in editorial activism. The truth of the matter is that Facebook is now a “publisher” and as such it can be sued, at least in the UK for defamation in connection with failure to exercise  editorial control and remove defamatory content from its platform.

Google found guilty on location cheating in Australia
Is catfishing illegal in the UK?
Service of injunction against an internet troll via Instagram for the first time in internet history

A “MUST SEE” NEW VIDEO RELEASE:

This podcast investigation was conducted by @AlexiMostrous and features the important work of attorney Yair Cohen @CyberLawExpert to hold sexual abusers and corporations who profit from sexual abuse accountable.

@LailaMickelwait And just like in the real world consent, should be revokable in the future. "Yes" can turn to "no."

The sadistic UK #gay website #DominatedMen.net shuts down after owner confronted with evidence of exploitation of vulnerable men. Victims of the #gayporn site whose videos are on #YouPurn, should get in touch for help #Traffickinghub @CEASEorgUK.. https://youtu.be/anZcvH1a3GI